The Hairy Hundred is a 93 mile gravel race out of Rocheport, MO that offers a good mix of rolling hills and windy flats. It is the fourth race in the Mid-MO Gravel Quadfecta Series (I just made that up), preceded by the Tour of Herman, OGRE, and Cedar Cross. Just 2 weeks out from the Dirty Kanza, it provides many riders a place to judge their fitness, dial in nutrition, and either boost or destroy confidence levels.

Though I had been eyeing the Hairy Hundred for months, I didn’t fully commit to riding it until about 9pm the night before. We’re currently on the middle of a move, which meant a couple hours of digging through boxes and multiple trips back to the old house to find a jersey and bib shorts. Nothing like procrastination to start things off on the right foot.

Race morning came with the usual hellos and slathering of chamois butter. After blowing up at the Cedar Cross a couple of weeks ago, I’d decided to stick with a group of like legged riders regardless of how great or terrible I felt. No more solo gravel head games for me. Luckily I was in good company as Kate, Chuck, and Bob were all in attendance as well. At 8pm we rolled out on the Katy Trail towards glory.

The course started with a few miles of smooth Katy Trail until turning us north bound to begin the large loop of the ride. Within 6 miles, my fancy new Garmin 800 told me I was off course and that I needed to make a U-turn. That wasn’t very inspiring as the course was clearly marked and we were most definitely where we needed to be. I tried to ignore its nagging beeps and stuck to the course markings for direction.

Though all of the Quadfecta rides are within an hour’s drive of one another, they all have their unique terrain. The Tour of Herman offers 2 days of roller coaster climbs and smooth gravel, The Ogre has it’s endless low water crossings and unforgiving climbs, Cedar Cross brings single track and chunky gravel into the mix. The Hairy Hundred consists of sections of short, punchy climbs broken up by flat fast roll-ins to the town stops every 25-35 miles. 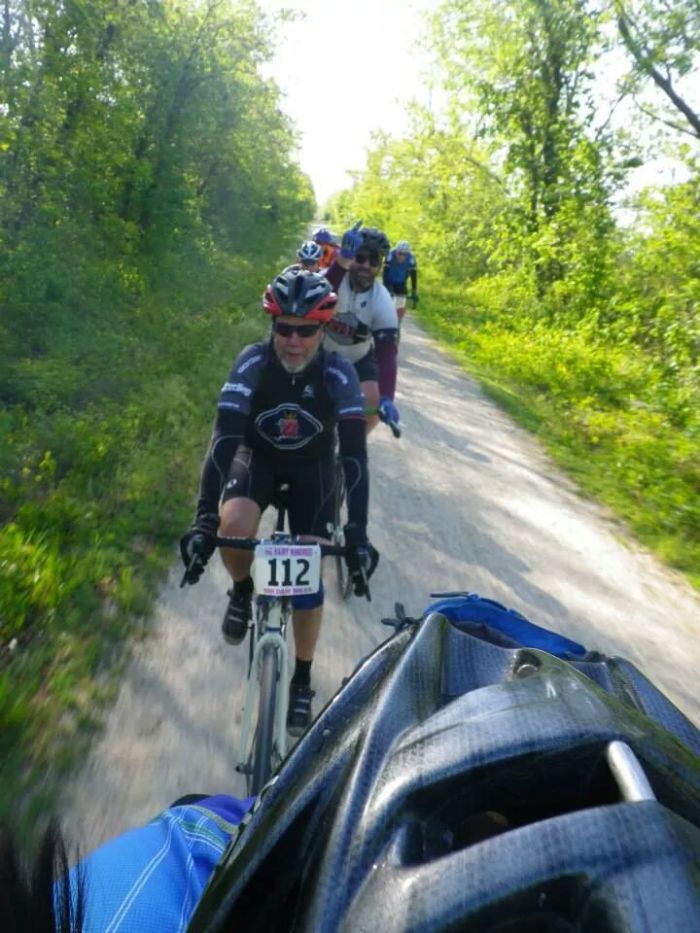 We rolled north to our first stop at the Casey’s in Fayette without issue. We were 32 miles in, and it was early enough in the day that we were still seeing other groups of riders coming and going. I’d already downed 2 bottles worth of Carborocket 333 and took the chance to refill them with Grape Gatorade. Luckily they had the real stuff and not just that new age G2 low calorie nonsense. I want my Gatorade full octane. I also picked up a delicious Fig Newton, which has proven to be a gut safe convenience store fuel source. Eating those always makes me feel 10 years old again for some reason.

We moved out and made it about 5 miles before I needed a stop for nature’s call. I probably could have used the Casey’s, but half the fun of gravel riding is peeing on the side of the road and I didn’t want to deprive myself of the opportunity. While stopped, I decided to reset the course on my Garmin to see if it would magically correct itself. Luckily, it did! My guess is that it was still trying to navigate me back to the race start. I simply told it to pick up the course where it was, and it was spot on for the rest of the day.

As paces got settled into, Kate, Chuck, and I found ourselves alone and it was getting pretty quiet for our group. Kate and I had noticed an abundance of round hay bales in the area, but they failed to start up a conversation, so I was forced to tell jokes. Unfortunately, my time in the Army has left me with an abundance of socially unpalatable jokes that I’m too ashamed to repeat, so I told the only one I know fit for civilian consumption. If you want to hear it, you’ll have to come out on a ride with us. It lifted the mood for a bit, but we were starting to get weary and things stayed pretty quiet.

Rolling down a hill we came across Margie and Renee of Big Tree Racing. Margie’s wheel had eaten her rear derailleur and they had given in to pushing the 10 miles towards the next stop. A rider had gone ahead in hopes of reaching someone on the phone for a pickup, but that was unlikely. We stop and assessed the carnage. No broken spokes, but a mangled electronic rear D. I was going to run a system’s diagnostic on it, but realized I didn’t have the appropriate Android to Di2 interface cable to run a full scan and I was concerned the initial boot process may drain both the on bike battery and phone battery if the core was out of alignment. (Ok, none of that is an actual thing, I may have a slight bias against electronic shifting.) Luckily we were able to remove the rear D and convert her to a single speed with enough success to get her to the SAG stop in Glasgow.

Having not supplied a bag to get dropped off at the half-way point, we stopped into Casey’s # 2 and reloaded Gatorade and Fig Newton rations before rolling into the official SAG stop in Stump Park. We took full advantage of the stop by eating free cookies and getting our chains lubed by the good folks from Cyclextreme, one of my bike shop alma maters. I almost turned down an offer for some chamois cream before realizing it was my favorite flavor, Button Hole. That stuff is a slimy dream come true. The packets had been stored in the clear top of a tool box sitting in the sun all day. That stuff felt like it had just come out of the oven. It was downright hot, but turned out to be just the ticket. Like sliding into a hot tub that at first feels like it may boil your innards, and then settling in and embracing the burning comfort. Since Margie’s bike had called it quits at the stop, Renee joined our group and we rolled out towards Casey’s #3 in New Franklin.

We climbed out of Glasgow and stuck to paved roads for a while. Coming back into the river bottoms, we were met with a stiff headwind. We formed a pace line reminiscent of the TOG/Virtus pain train at Cedar Cross, and took turns pulling the convoy along. We were rolling about 15mph when Kate took the lead. Her head dropped, cadence rose, and we bumped up to 17+. Luckily, just as I was reaching my breaking point, Chuck also let up a bit and we toned back down. Kate may talk a modest game, but she can lay down some pain with the best of us.

After a quick stop to recheck our route, we rolled through Franklin, MO on to our next stop in New Franklin. Now, these 2 towns are maybe half a mile apart. I suppose someone just got fed up with Franklin’s crap and decided to make a new one. They do indeed have very different feels, and I can’t help but wonder if the New Franklin residents turn a smug shoulder when those hillbillies from Franklin make the ¼ mile trek over to raise a bit of hell. Somewhere in those two towns are a pair of star crossed lovers and when their cousin’s find out about the romance, a Dodge Neon is getting its tires slashed.

After a brief stop at the NEW Franklin Casey’s, we set out on the last 11 mile section of the race that doubled back on the route we had taken out. Once we hit the Katy Trail, the pace picked up again. With Renee and Kate leading out, Chuck and I just tried to keep up and made note not to let the girls lead again. Eventually the tunnel in Rocheport was visible and we rolled across the finish to the reception of cold beer and hot pizza.

My wife and kiddos where there to see my non-sprint finish and it’s always good to see them after a long day. It’s a huge bonus that the Quadfecta races are so close to home and the family can come out and support me.

It was another good day on the bike and the last opportunity for some real miles before Dirty Kanza. A big thanks goes out to the organizers, sponsors, and volunteers.

Things that worked
Real Gatorade, Fig Newtons, Mustard packets – I had eaten all of my “Race” nutrition by the first stop and am pleasantly surprised by the effectiveness of these two items. At one point I had a bottle each of Grape, orange, and fruit punch and the variety made drinking warm liquids much better. The mustard packets are a free and fast way to get more salt into your system and help prevent cramps, which I didn’t get all day. Eating one is also like taking a shot of liquid electricity.
Group riding and pacing – Though I still felt the mileage, I had pretty even pace all day instead of going out too fast and blowing up halfway through. Riding with a group keeps the solo gravel monsters at bay as well.
Gamin – It was spot on with every turn after I fixed the initial user error. The course was very well marked, but it’s nice to know the GPS did its job as well.

Things that didn’t work
Saddle Chamois Combo –  While it wasn’t horribly painful, I was ready to be off the seat at the end. I’ve made some adjustments and think I have it dialed in now, but nothing like making saddle changes 2 weeks before DK.

Impressed by my blazing speed or race prowess? Have questions on what it’s like to be a fat kid in spandex in a rural Casey’s? Thinking of riding gravel and looking for some ill-advised tips? Leave a comment below!